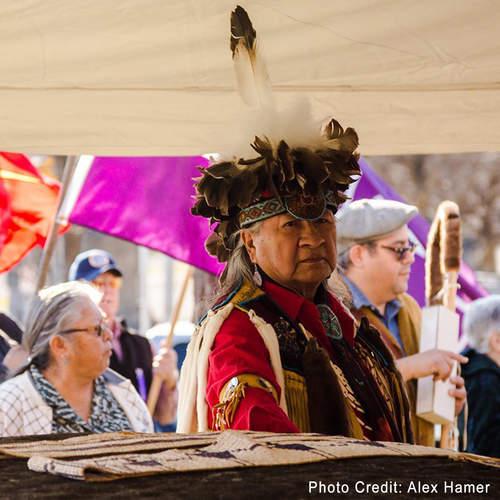 225th anniversary of historic federal Canandaigua Treaty is celebrated on Nov 11 with descendants of treaty signer Thomas Pickering in attendance. The public event recognizes sovereignty, peace, and friendship between nations

Experience 225 years of the living history of a seminal treaty!

On Monday, November 11, the public is invited to join the 225th anniversary of the historic, federal Canandaigua Treaty of 1794, celebrated at the location of its original signing.

The annual commemoration serves to “polish the chain of peace and friendship” between the Hodinöhsö:ni’ (Six Nations Confederacy) and the young United States. The treaty was signed by Colonel Timothy Pickering—official agent of President George Washington—and sachems from the Six Nations Grand Council. It signified peace between the two and recognized the sovereignty of the other as distinct nations to govern and set their own laws.

Attendees gather at 1:30 pm outside the Canandaigua Primary School for a march to the front lawn of the Ontario County Courthouse led by Hodinöhsö:ni’ Chiefs followed by representatives from their nations and the public. At 2:00 pm, Ganondagan State Historic Site Manager Peter Jemison opens the commemoration ceremony with the traditional Thanksgiving Address. Hodinosohni’ leaders and other officials will be present, plus Quaker representatives whose ancestors—as people of peace—were witness to the original signing, ensuring fair negotiations.

From 12-4 pm, attendees are invited to the Ontario County Historical Society to view one of only two original copies of the treaty, plus pertinent letters. At 5:30 pm at the Primary School auditorium, Jemison will present the keynote speech on the significance of the Canandaigua Treaty.

*Times, dates, and prices of any activity posted to our calendars are subject to change. Please be sure to click through directly to the organization’s website to verify.